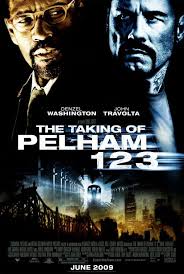 A ruthless crew hijacks a New York subway train. Glossy but stirring second remake of the 1970s Walter Matthau/Robert Shaw classic. Inevitably the movie is opened up to the story’s detriment, but this is nevertheless an exciting and well-played flick.